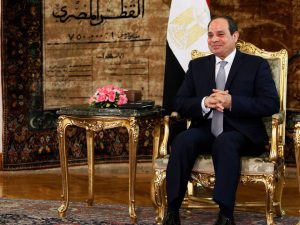 (JTA) — Egyptian President Abdel Fattah al-Sisi said his government would build synagogues and provide services to the Jewish community if there is a resurgence of the community in his country.

Sisi made the statement last week during a meeting with a U.S. delegation, The Jerusalem Post reported.

The commission members were in Egypt to invite Sisi to attend the ceremony in the fall, when the medal will be presented to Jehan Sadat, the wife of the leader assassinated in 1981.

The commission was founded and led by Ezra Friedlander, an Orthodox Jewish consultant and lobbyist from New York.

Before Israel declared independence in 1948, about 75,000 Jews lived Egypt. Only a handful of Jews live in Egypt today.