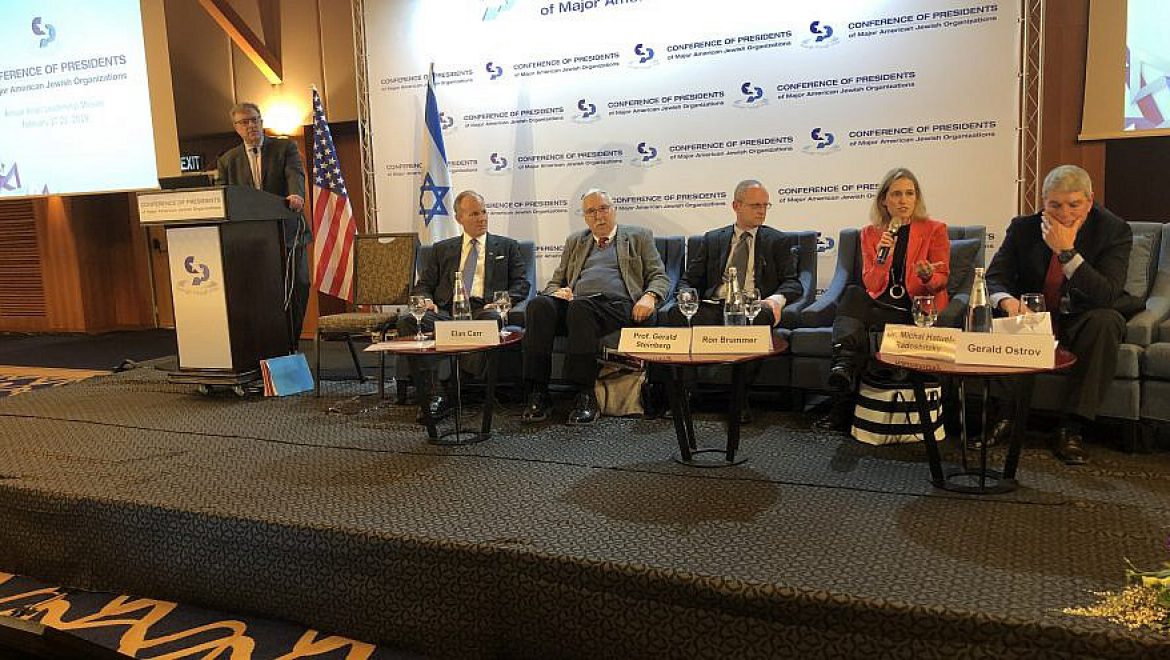 (February 22, 2019 / JNS) Elan Carr, the United States’ new envoy to combat anti-Semitism, told American Jewish leaders in Jerusalem that he will work to end the “attempted distinction” between anti-Semitism and anti-Zionism, while praising U.S. President Donald Trump’s efforts to combat the “scourge.”

“I will work to eradicate the attempted distinction between anti-Zionism and anti-Semitism. There is no distinction,” he told U.S. Jewish leaders gathered at Jerusalem’s Inbal Hotel as part of the annual Conference of Presidents of Major American Jewish Organizations summit.

here is a greater rise in new anti-Semitism that clothes itself as anti-Zionism. The anti-Semitism of the European street, of the college campus and of those that have embraced the notion that the Jewish people don’t have a right to their homeland,” said Carr.

“Zionism wasn’t born in 1948 or with [Theodor] Herzl or with the First Zionist Congress. Zionism started with Parshat Lech-Lecha, with Moses and on the banks of the river of Babylon,” he said. “Anyone who attempts to deny the Jewish religion its basic faith tenets, its rights to a homeland is wading into anti-Semitism. And I will fight it,” he declared.

After a nearly two-year-long vacancy, Trump tapped Carr to fill the State Department’s Special Envoy to Monitor and Combat Anti-Semitism earlier this month.

Carr, 50, who is Jewish, is an Iraq-war veteran and grandson of Holocaust survivors. In an interview on Feb. 4, he told JNS, “I hope I make the difference. At the end of the day, all that matters are results and impact. And that’s what I pray—that I should have an impact on this terrible [problem].”

In his address to Jewish leaders on Thursday, Carr said Trump “could not be more passionate” about fighting anti-Semitism.

“The President of United States spent considerable time in State of the Union speech to address anti-Semitism,” said Carr.

Carr’s comments come amid a growing awareness and pushback against anti-Semitism in the West. On Tuesday, thousands of people took the streets in France to protest rising anti-Semitism there, with French President Emmanuel Macron pledging to adopt the International Holocaust Remembrance Alliance’s definition of anti-Semitism.

“There is a lot of good news, too. We have real allies in Europe and in some cases in the Muslim world who are passionate about this issue. They care about the future of the Jewish people,” he said. “This will be a full-court press. We are not going to be ignoring any part of the world or any ideology.”