We knocked on Ankara Jewish Community Leader Can Özgön’s door to get to know Ankara Jews better, to learn about their problems, to talk about the history of the Jewish neighborhood and where the community stands today. We discussed the heavy burden they bear as a community consisting of only 35 members to preserve their history and keep their synagogue alive. 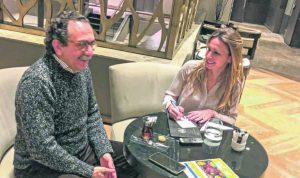 The history of Ankara Jews dates back to Roman Empire. Later, Sephardic Jews joined the Jews of that era who were known as Romaniotes. Even though Ankara Jewish community was never a big community in terms of population at any period, it was definitely an important part of the city.

The first issue we discussed with Mr. Özgön was the Jewish population in Ankara. “The population of Ankara Jewish Community has neither decreased nor increased in the recent years. I can say that there are nearly 35 people, today. Of course, among those people there are some who go to synagogue and tend to community problems and there are some who has no interest in the community. Whenever there is a problem, we try to handle it within ourselves.”

When you have a community with just 35 members, the responsibility of each member naturally increases. It becomes necessary to find financial support. “We have Istanbul’s (Turkish Jewish Community) financial support.  Whenever there is something big, we ask for their help. They never turned me down.”

The community’s biggest challenge is its population. “We are approximately 35 people. However, this creates a big challenge when we need a minyan. We try to at least open the synagogue twice a year, on Rosh Hashana and Yom Kippur, by bringing a Rabbi from Istanbul.”

Ankara Jewish Community was more populated in the earlier times. Özgön explained, “At the time I was born, most Jews including my family had moved to other neighborhoods from the neighborhood the Synagogue is located. However, I spent quite a lot of time in the synagogue. At those years, there was Mahazike Torah. Avram Kohen founded this organization for young members of the community. At Mahazike Torah, I learned how to read and write in Hebrew.”

When the state of Israel was established in 1948, many members of Ankara Jewish Community immigrated to Israel. As the city of Ankara developed and expanded in 1960’s, the immigration started first from Jewish neighborhood to other neighborhoods in the city.

Another wave of immigration hit Ankara Jews before the 1980 coup. Özgön explained those days, “People mostly immigrated to Istanbul at those times.” The migration continued in the following years. Most common causes were education, marriage or business. Istanbul was at the heart of business world. Today, the youngest member of Jewish Community in Ankara is Özgön’s 21-year-old daughter who is a university student.

The heart of Ankara Jewish Community beats at the synagogue located in the Jewish neighborhood. Being an old building, the synagogue has its own structural problems. “It’s a 200-year-old synagogue. It has been renovated a few times. The last renovation was done in 1994. Our biggest problem is the roof. It’s very important to preserve the ceiling. The synagogue has a unique ceiling with handcrafted engravings and paintings…Since it is very expensive to renew the roof completely, we repair one part of the roof each year.”

The street where the synagogue is located at, is doomed. Old abandoned manors, empty houses along the street… The abandoned houses and the sidewalks remind us of past’s warm conversations, laughter and experiences. Even though the street can very well be transformed into a cultural landmark, with its current ragged look, it looks more like a forgotten zone.

These old buildings also pose danger to surrounding buildings and structures. Two of the buildings collapsed a few years ago causing the midrash’s wall inside the synagogue to collapse as well. Özgön explained how they strived to repair and renovate the wall. “Two houses collapsed onto Midrash and demolished the wall of Midrash. Thanks to the efforts of Honorary President of Turkish Jewish Community Bensiyon Pinto, four years after the demolition, a construction team visited the site, removed the ruins and rebuilt our wall.”

Another problem is the cemetery. The cemetery has been vandalized various times, tombstones have been smashed. “I constantly have to deal with the cemetery problem. The vandals smash and deface the tombstones just to do evil…”  Özgön also mentioned that there are not many vacant spaces for burials left in the cemetery, therefore it is very valuable.

Ankara Jews don’t have a school anymore. The school which was once located right next to the synagogue, had been demolished. “Now they are using the empty lot for parking purposes and it’s very dangerous. For example, at New Year’s Eve, people lit fire right next to our synagogue’s exterior wall. If that fire had gotten out of control and turned into a major fire, the whole neighborhood would have burnt down.” Özgön also added that since there are no guards around the synagogue, they had installed cameras for security reasons.

When visiting this Synagogue and the Jewish neighborhood, one cannot help but wonder; how this beautiful street became this way, why it was left to its fate…

If there was life in this neighborhood…

If there was life in this neighborhood, this old and symbolic Ankara neighborhood with its authentic houses, Turkish bath and fountain would transform into a cultural treasure and be preserved, escaping the risk of being demolished.

If there was life in this neighborhood, residents of Ankara would have learned about the existence of such a place and realize that all people can live together in peace.

If there was life in this neighborhood, people could say Jews also live in Ankara.